> OPSI Blog > Sensemaking possibilities #3: refining tools and testing them against futures of government

Sensemaking possibilities #3: refining tools and testing them against futures of government

The OPSI mission has three pillars:

In 2020, the work that supports this mission shifted sharply; suddenly, there was a deluge of “emerging practice” as every country on earth was facing different shades of the same problem. We, in turn, experimented rapidly with ways to support governments: collecting responses to COVID-19 as a platform for examples and collaboration, seeking out incisive analyses, and designing the Government After Shock event as a focal point for stock-taking and direction-setting.

There has been a parallel deluge of analyses, insights, and recommendations for how governments can and should react to COVID-19, and how governments can and should change for the long term based on the lessons and experiences of this year. We have been looking for ways to support governments in making sense of this. We started with initial mapping tools that place ideas within conceptual space (paradigm shifts, policies, methods, behaviours), a spectrum of maturity (hunches to empirically proven models), and problem spaces (environment, social well-being, etc.).

Next, we want to go a layer deeper, which also requires tightening the frame. We collected ideas that generally took the form of “how governments should change for the long-term after COVID,” but the analysis approach could be used for any idea space (e.g., “how governments can ensure social security in a restricted economy”) (in fact, the analysis model is inspired by an academic paper on films about investigative journalism).

Again, to set a boundary, we looked at the calls coming from leading think tanks, global consultancies, and members of our Dialogues Network.

We identified a common set of narrative structures within this mass-market policy and governance analysis. 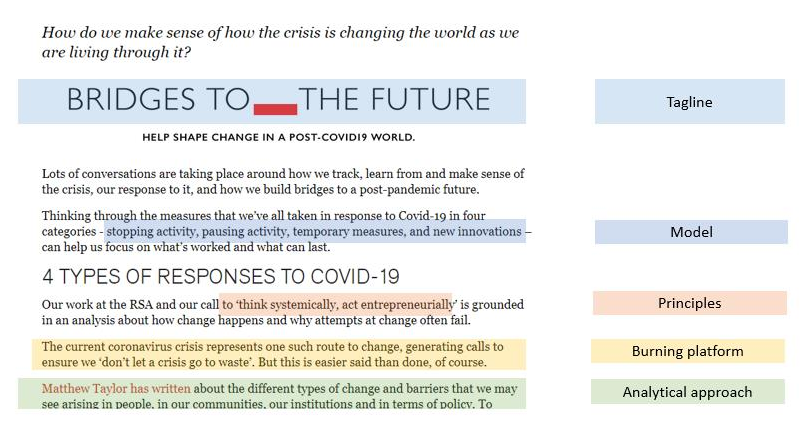 For making sense of such analyses, there’s a subset of narrative elements that are most common and most revealing: principles, actions, and conceptual space. A note: while the analytical approach is incredibly important to dissecting these ideas, most of the articles reviewed perhaps glazed over that element and the evidence base for the sake of brevity and readability.

Of the 19 analyses that we ran through this structure, there were the following broad principles: recommendation spaces for, in effect, “what government needs to prioritize” and how often they appeared out of the set:

There is, of course, a selection bias in OPSI’s network, so it is perhaps not surprising that innovation and experimentation was the most common priority (though it equally came from non-innovation focused organisations). As well, innovation is also a broad term that can include foresight, systems thinking, user focus, flexibility, and on. However, there are some noteworthy insights:

Experimentation and rapid learning were much more common than resilience: the community sees more change and shock coming, and the proffered response is to quickly experiment down new tracks, not to try to get back onto old tracks as quickly as possible.

References to policy spaces (environment, economy) quickly segue into the concept that it is all one big policy space and governments need to find ways to scale holistic approaches, and that even the improvement in intersectoral collaboration over the last decade is insufficient for the next one.

Lastly, two honourable mentions: the first to mission focus, the principle that people need a banner to rally behind, to give directionality to work and investments such as a sustainable economy or closing social opportunity gaps.

The second goes to locality – structuring connections between national and international responses to hyperlocal contexts – which was seen as both critical to collaboration beyond silos and a user focus, but also as a way to supercharge experimental learning.

Actions and principles tended to flow from each other, so there is some overlap. The below is a mapping of the more common “governments must X” statement, the most defined specific actions contained in the recommendations. They could be policies, paradigm shifts, behaviours, or methods. For instance:

The purpose of mapping ideas to conceptual space is that it lets us contextualize ideas within the wider ideas ecosystem. Perhaps better citizen engagement is important, but stacked up next to ten other possibilities it might not be the priority. Or, as you start to imagine the theory of change for a given idea, you can start to see how it might conflict with the goals of other reasonable approaches.

Theories of change are often strategic exercises, positioning an organisation for maximum impact within their mission and problem space. I think they are also a useful deconstruction tool for sensemaking. Especially when, as in the case of recommendations to government inspired by COVID-19, the problem is ill-defined and emergent. There are many competing ideas, and opportunity for both conflict and complementarity between interventions.

Figure 3: The simplest model of a theory of change

At its core, a theory of change is a structure that encourages alignment and coherence between goals and outcomes. It’s a process of personal or organizational honesty, research, and self-reflection:

Which seems a little obvious, but when you start dissecting each layer and how they relate the questions become equally obvious. For example, imagine that the goal Output is more experimentation in government. The Activity might be training, enabling more people to actualize desired behaviors. But what if the Problem is not actually capacity or knowledge, but policies and project design processes? These sorts of misalignments will come out of hard questions and deep dives into the logic model, or theory of change. Filling in the blank in this sentence is often harder than it seems, and can result in hours of discussion among a team:

(And then “… these activities will support this strategy…” and so on.)

Most of the articles we reviewed focused on the Strategy and Activity layers, glossing over the details behind the Problem and only lightly painting a portrait of the outcomes without defining the entire cause-effect chain. Governments are then left to sift between options for actions, where the more important choices are about problems and outcomes – which is where governments can identify conflicts and complements. Taking our list of articles as an example, we could start to map them on a theory of change like this:

Figure 4: a simplified example of a theory of change.

Each of those cause/effect changes can then be explored, and we have gone from “experimentation” as a government principle to a different problem and outcome to explore and answer: whether, and to what extent, future system shocks are likely and likely to negatively impact people without interim action.

Over the course of this effort to “make sense” of what governments are hearing, and test tools for re-use, we have:

Within the frame we selected for our own sensemaking – “In response to COVID-19, governments must _____,” we also see some patterns and insights:

Where to start, and where to go

At the beginning of this work, we were hoping to identify a simple, flexible tool that could support sensemaking of the changing world and potential responses to it. We additionally hoped that we could connect sensemaking activities happening in multiple communities through the Government After Shock events to add up to something greater than the sum of their parts.

In the end, we found that the tools always depend on the starting point.

What ideas are you hearing for the future of government?

We started with a shortlist of articles from think tanks, consultancies, and Dialogue Network partners, generally framed as “After COVID-19, governments must do _____” and aiming as much as possible for a global scope. What ideas, articles, and possible futures are catching your interest? Feel free to send them to kent.aitken@oecd.org. I can run them through the same analysis process and write an update blog on how the community-submitted ideas compared to the ones from the defined frame.